An N.C.A.A. Champion Is Turning Pro. He Already Has a Big Win. 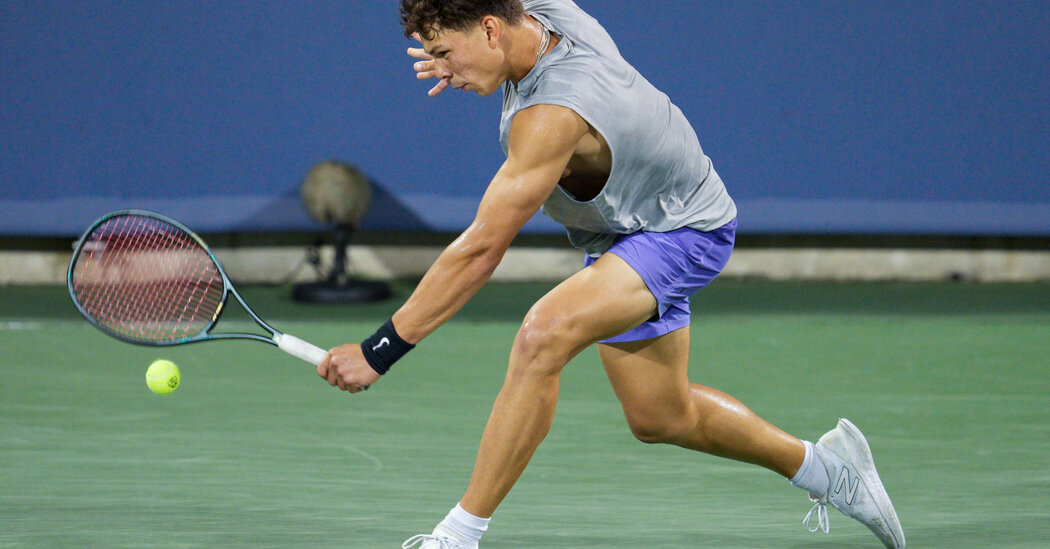 Ben Shelton, the reigning N.C.A.A. Division I men’s singles champion and one of the most exciting young tennis talents in the United States, turned professional on Tuesday, and he’s ready for quite a few changes.

He will make his first trip outside the United States.

He will play his first tournament on red clay.

He will play his first tennis on grass.

But for starters, Shelton, 19, will play in his first Grand Slam tournament after receiving a wild card into the main draw of the U.S. Open, which begins Monday in Queens.

“I think that I have some pretty good momentum right now,” Shelton said in a telephone interview on Monday, explaining his decision to turn pro. “I really enjoy being out there and playing on tour and getting to play some of these really cool tournaments, and that’s something I want to continue to do and not have to take a five- or six-month break for the college season. I love playing college tennis, but I’ve definitely had the most fun playing in these pro events.”

After two seasons at the University of Florida, where his father, Bryan, is the men’s tennis coach, Shelton has certainly ticked two big boxes: clinching the national team title in 2021 for Florida as a freshman by winning the decisive match against Baylor and then winning the individual title this spring.

But what sealed the deal for him on leaving college tennis were his results on the pro tour over the last few weeks: a tight three-set duel and defeat in Atlanta against John Isner, long the top-ranked American, and then eye-catching victories at a Masters 1000 tournament, the tier below the Grand Slams, outside Cincinnati last week. He began the event, the Western and Southern Open, with wins over Lorenzo Sonego of Italy and fifth-ranked Casper Ruud of Norway.

Amateurs can play pro events and accumulate ranking points. Shelton is up to No. 171 in singles, making him the third-highest teenager in the ATP rankings behind No. 4 Carlos Alcaraz of Spain and No. 32 Holger Rune of Denmark, who are both 19 years old and already Grand Slam quarterfinalists. But turning professional will allow Shelton to keep his prize money of $84,510 from Cincinnati and the $80,000 he will earn for playing in the first round of the U.S. Open.

By turning pro, Shelton will follow the path of his father, who peaked as a top-60 singles player in the 1990s during a golden era for American men’s tennis and who reached the fourth round of Wimbledon as a qualifier in 1994, upsetting the No. 2 seed Michael Stich of Germany in the opening round.

But while Bryan Shelton was 6-foot-1 and played right-handed with attacking tools and speed, his son is a 6-4 lefty — still an advantage in tennis — with an intimidating serve and knockout power from the baseline, particularly with his whipping forehand. Ben Shelton often put that shot to devastating use against Ruud when he was not busy flicking a between-the-legs lob winner that left Ruud looking stunned at the net.

“I think things have certainly accelerated a lot faster than I had planned or thought with Ben’s development on the court and with his maturity as well,” Bryan Shelton said in a telephone interview from Gainesville, Fla., the university’s city, on Monday.

Ben Shelton entered elite tennis comparatively late, having not competed or even played regularly until age 11 when he decided to stop his nascent career at quarterback and focus on the family sport.

“This was the same kid who said that ‘tennis will not be my sport’ when he was younger,” Bryan Shelton said. “So he definitely came to it on his own. There was no pressure from mom or dad or sister.”

Ben’s older sister, Emma, is a senior on Florida’s women’s tennis team. Their mother, Lisa, was also an accomplished junior player and is the sister of the former world No. 4 doubles and No. 43 singles player Todd Witsken.

“We kid around, like which genes is Ben playing with, the Shelton genes or the Witsken genes?” Bryan Shelton said. “He’s got some good blood running through him, that’s for sure.”

Ben Shelton said his father’s tennis knowledge played a key role in his decision to choose the sport.

“I saw that my dad was a college coach and knew a lot about the game,” he said. “My chances of going far in the sport and having that resource was definitely going to be helpful. The other thing was I grew kind of late. So going into the end of middle school, there was a lot of huge kids in football, and I hadn’t really hit my growth spurt yet. I was maybe a little tired of getting bashed up all the time.”

He now has a build well suited to playing in this age of taller players, which includes Daniil Medvedev of Russia (6-6), Alexander Zverev of Germany (6-6) and Stefanos Tsitsipas of Greece (6-4), all of whom are top-five players.

But the Sheltons are well aware that big power and promising early results are no guarantee of reaching the big time. Ben Shelton got a quick reminder of the rigors of the pro game in the round of 16 at the Western and Southern Open, when he was drubbed, 6-0, 6-2, in a night-session match on Center Court by Cameron Norrie, a British left-hander who was a former collegiate No. 1 at Texas Christian University.

“There’s definitely a lot of different players out there; not just one type of tennis you are going to win with,” Ben Shelton said. “I definitely learned that from match to match you’re going to have to have a different game plan and be able to make adjustments. You’re not always going to have a perfect day. And when you’re not playing well out on the pro tour, pretty much everyone can take advantage of that, so I kind of learned that I need to think a little quicker on my feet.”

Bryan Shelton, who has coached his son from the beginning, will continue to guide Ben’s development with help on the road from Dean Goldfine, a veteran American coach who long worked with the American star Todd Martin. Most recently, Goldfine helped coach Sebastian Korda, 22, one of the most promising young American men’s players, whose father, Petr, an Australian Open champion, was on tour at the same time as Bryan Shelton.

Ben Shelton will be managed by TEAM8, the small management company that was founded by Roger Federer, one of Shelton’s tennis idols, and his agent, Tony Godsick, who has a long connection with the Shelton family. Ben Shelton will work day to day with Alessandro Barel Di Sant Albano, who represents an established American teenage star, 18-year-old Coco Gauff.

Bryan Shelton knows firsthand all that can go awry on tour.

But Bryan Shelton also knows what it takes, and he sees reassuring signs as he prepares for the bittersweet experience of losing his Florida team’s No. 1 player and watching his son make a big step forward.

“It took me a long time to get to where he’s at, and he started later than I did,” Bryan Shelton said. “So he’s just a different animal than I was, and I try not to compare too much what I did and just help him along the way, but I also realize he’s got a much higher ceiling.”